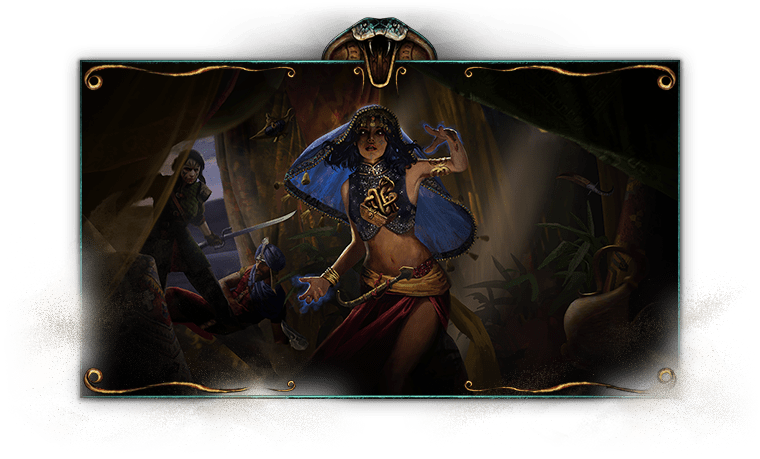 EVERYTHING HAS A PRICE!

They came from faraway lands — foreign and mysterious. They’ve brought marvelous wares with them — both magnificent and terrifying. On their journey, merchants of Ofir will cross paths with all GWENT’s factions; some want to trade with them, while some want to take their wares with brute force or cunning.

No matter what approach you will choose for yourself, remember that Ofiri are always getting paid — if not with gold, then with blood.

Utilize new tactics to gain an advantage on the battlefield, reinforce your decks with elite warriors from all 6 factions, including 11 neutral cards. Everyone gives the Moorlehems a wide berth. Even tax collectors. Every tiger is dangerous. Especially one that has taken a liking to human flesh… Deploy (Melee): Give Bleeding for 4 turns to an enemy unit.
Deploy (Ranged): Move an enemy unit to the other row.
Crew: Combine both Deploy abilities. A lot of learning awaits you. And a lot of mistakes. Contrary to popular belief, farmers don't stop work in the middle of the day to hide from the heat - they hide from the Noonwraith.

Stratagems make deckbuilding even more interesting! This new card type adds another layer of skill to the battle. Choose from one of 12 Stratagems to define the unique bonus for going first in the match. Order: Boost a unit in your hand by 3.

Lean in, listen closely, and you'll hear a whisper… A diamond the size of a goose egg. And worth a small country. When this blade cuts through the air, you don't hear a swish, you hear music… Everyone carries some darkness in them. Some have learned to bend it to their will… Order: Draw a card then Discard a card.

Time doesn't flow, it goes in circles. The past becomes the future, grandfathers repeat the mistakes of their grandsons. 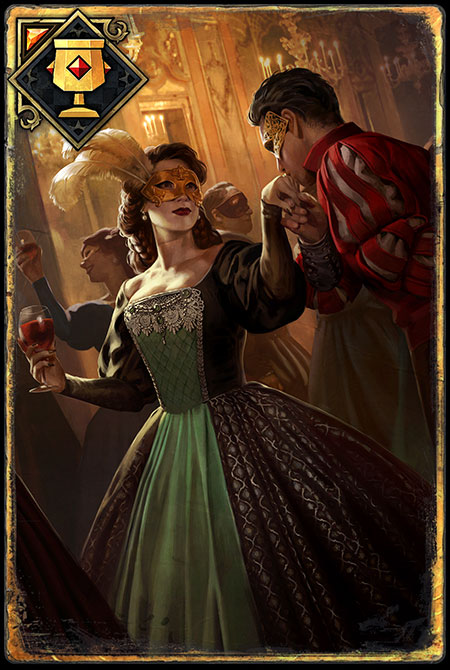 Progress whenever you play an Aristocrat.

Spawn a Thirsty Dame in this row.

Spawn and play Fangs of the Empire.

Spawn and play Fangs of the Empire.

You are eternal and you are rich, what else to do but throw parties? Thirsty Dame is a regular attendee of the Masked Ball, and benefits from all things Nilfgaard wants to do — like applying statuses that will control your opponents actions. However, the Ball isn’t exclusively for aristocratic Vampires; when more Aristocrats are played, Nilfgaard will show its Fangs (of the Empire), which will strive to eliminate its opponents. 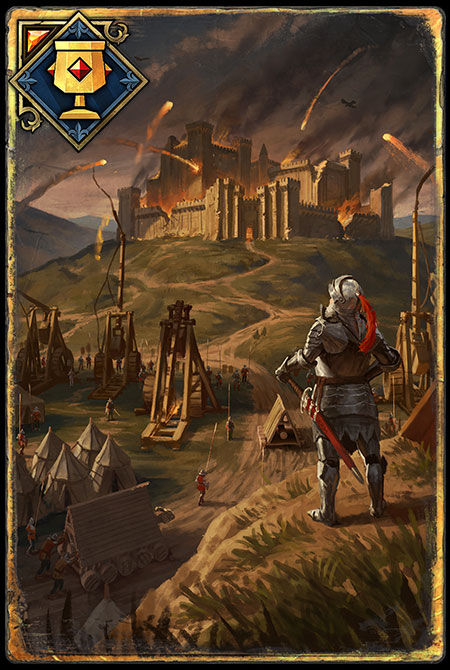 Progress whenever you play a Siege Engine

Spawn a Reinforced Trebuchet in your Ranged row

Spawn a Battering Ram in your Ranged row.

Lay waste to your opponent’s ranks with the ultimate Siege. Razing a city (or other cards) has never been so easy. At the moment of being played, the superior siege engine — Reinforced Trebuchet will come to your aid. Play more Siege Engines and the Battering Ram will enter the fray. At the very end, finish the story with a nice Bombardment. 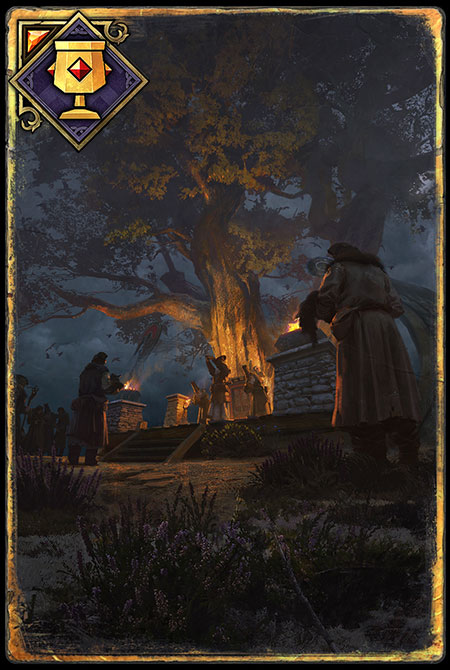 Progress whenever you play a Druid.

Spawn a Crown Clan Preacher on this row.

Gedyneith is embodiment of everything Crow Clan stands for — Druids, Alchemy and… Crows. Crow Clan Preacher teaches students about Alchemy and in the process also benefits from it. Subsequent chapters will not only help fulfil the condition but also empower some of the less-played archetypes — Beast and Alchemy. 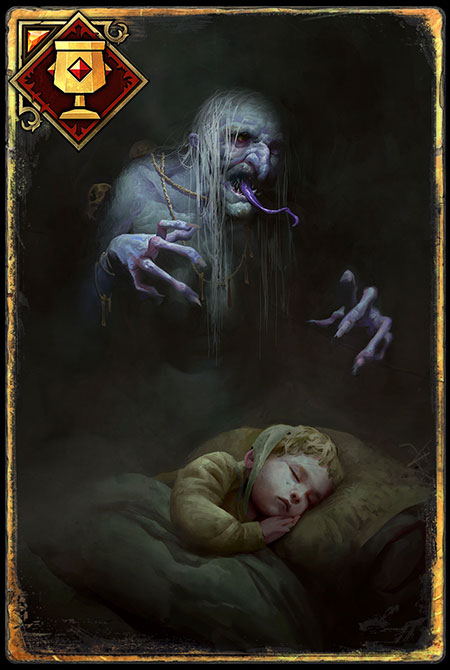 Progress whenever you play a Deathwish.

Spawn a Desert Banshee in this row.

Haunt is the final puzzle that will tie Deathwish and Consume archetypes. When played, Haunt offers the best of two worlds; Desert Banshee will help you amass points to keep up with your opponent but also allow you to trigger one of your Deathwishes, which also happen to be the driving factor behind this artifact. Following chapters of the artifact will reinforce this symbiotic relationship between Consume and Deathwish cards by giving the player more fuel to keep the fire going. 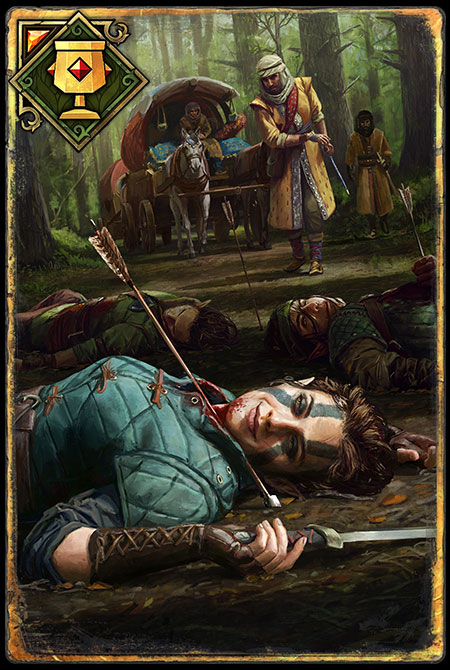 Progress whenever you play an Elf.

Spawn an Elven Deadeye in this row.

Spawn 2 Elven Deadeyes in this row.

It’s a bunch of dead elves! Until they are not. Feign Death will band on your opponent quicker than they can take out their swords (and engines). This elven tribe will swarm your opponents very quickly. When an Elf comes to the board, more of them will appear. At the end of the story, just Waylay whoever comes by. 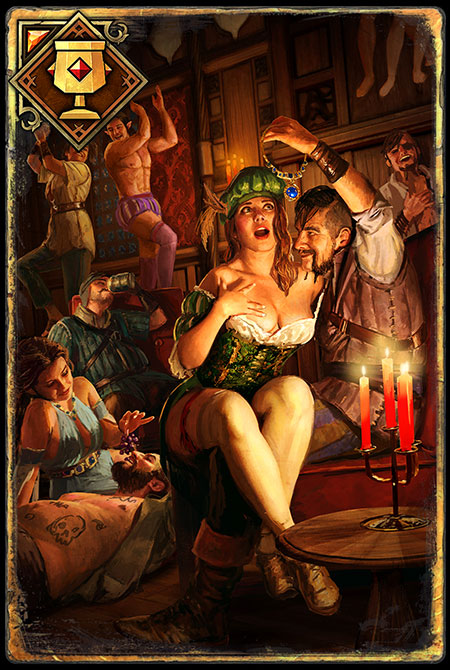 Progress whenever you play a unit with Fee.

Spawn a Passiflora Peaches on this row

Passiflora is a brothel in Novigrad, and a house to Passiflora Peaches, that loves money and will benefit if you have at least 4 coins. Also whenever you play a card that can pay for its own abilities, they can perform Swindles — and might even be able to Eavesdrop on something lucrative. With this much going on, Passiflora should fill your pockets rather easily and help you gain an edge over your opponent.

EVERYTHING HAS A PRICE!
PLAY FREE ON PC